An ester is the result of a condensation reaction between carboxylic acid/s and alcohol/s. Reaction kinetics are in favor of the ester as the generated water is removed. The catalyst also influences the reaction kinetics.

Once the ester is produced, the product can revert to its original nature, that is, carboxylic acid/s and alcohol/s. This process is called hydrolysis. There are various parameters to play with to avoid the aforementioned reversal, and which will determine the hydrolytic stability of an ester.

For this purpose, a new methodology was developed by IQLubricants to be able to compare hydrolytic stability behavior over a long duration of time. This methodology helps us designing the right strategy for each application.
The experiment consists of mixing 75 % of product and 25 % of water using a metal catalyst. The tests are performed at 93 ⁰C in a reactor. The extent of hydrolysis is measured by monitoring the acid value of the oil phase. As hydrolysis evolves, the acid number increases until all the water is consumed, that is, it reaches a plateau. Having a more hydrolytically stable structure reduces the rate of hydrolysis but does not change the final acid value. Once we have the evolution of the acid value, the rate of hydrolysis can be calculated, and products compared. The method is a modified version of the “beverage bottle method” (ASTM D2619) with the advantage that we have all the information of the hydrolysis evolution over time. Another benefit is the consistent results we obtain thanks to the continuous stirring and the longer reaction times.
As an example, in figure 1 we can see the hydrolysis extent over time for three different products. We can establish that product A is more stable to hydrolysis than product B or C. By designing the right structure, we can control the rate at which hydrolysis occurs. 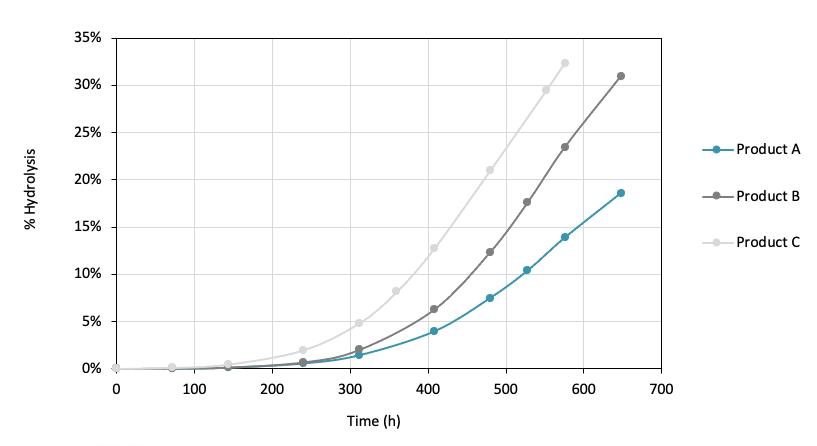 In other words, the complete and precise understanding of the hydrolysis phenomena thanks to the design of a tailor-made methodology, allows IQLubricants to translate a high-performance application need into a specific molecular structure.